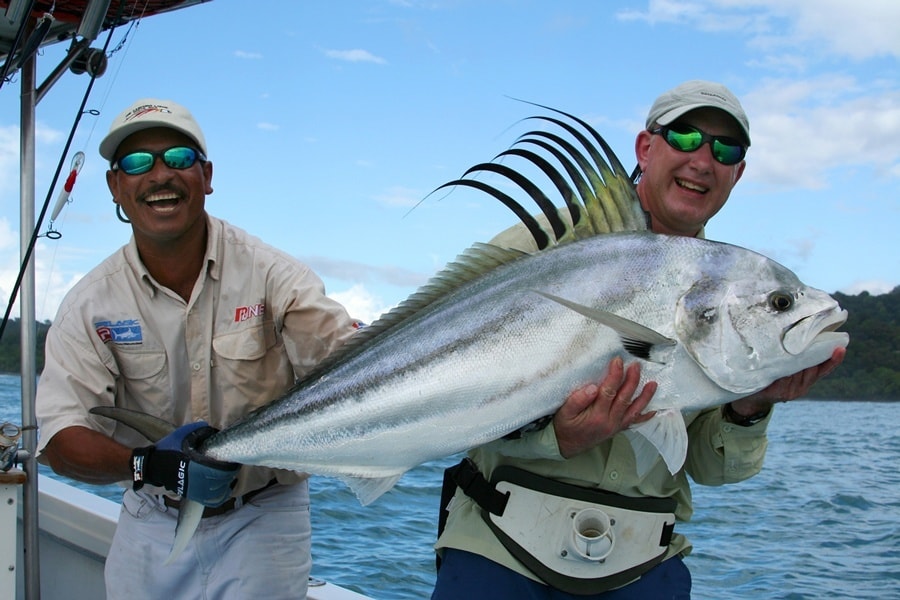 Rooster fish are hard-fighting (and make for a great photo op!)

When it comes to sportfishing Tamarindo, there’s a lot of thrill. Not only do many local boats practice hook retrieval – a true test of skill and mettle, as well as ocean stewardship – but the fish that populate our waters are what angling dreams are made of: sailfish and marlin, rooster fish and mahi-mahi – sun, sea, and hours of hard fighting are in your future. It’s no wonder this is one of the most popular things to do in Tamarindo.

In what promises to be the first of a few posts about sportfishing Tamarindo, here are six of the most oft-caught, most brag-worthy specimens you can hope to catch off our Pacific coastline:

Large, acrobatic, and hard fighting, sailfish are the fish that every angler dreams of in Costa Rica. And for good reason: This is one of the most thrilling sport fishing experiences you can have – anywhere, period. Just imagine, you’re cruising through the clear Pacific and then, bam! You’re on the opposite end of a sailfish, engaged in the fight of your life. Who knows? You may just catch the next world record. (At least two have been caught here.)

If sailfish aren’t big enough for your sport fishing tastes, then we dare you to hook a marlin – whether striped, blue, or black, we promise our billfish all kick up a great fight. Weighing in at a massive ≤500 lbs. (striped marlin), ≤1,400 pounds (blue marlin), and ≤1,600 lbs. (black marlin), Costa Rica’s marlin species can measure up to 15 feet and may take hours to reel in. In the end, it’s all worth it: for many, marlin is considered the pinnacle of offshore fishing!

We’ll start by saying that bigeye and skipjack tuna are also common catches off of Tamarindo, but we know why you’re really here – the yellowfin! Often found in schools that weave around spinner dolphins – they make ‘em easy to spot! – our yellowfin tuna can weigh in at anywhere from 30 to 200 pounds, with trophy “cows” tipping the scales at up to 300 pounds! Big bonus: Tuna are not a catch-and-release species (as are, say, sailfish and marlin), so whatever you catch, you can eat.

Season: Year-round, with a peak from May-November

If you’re looking for a tough (satisfyingly tough!) sport fish, then you’re going to love Costa Rica’s famed rooster fish: Known for their distinctive dorsal fin and spiky “rooster’s comb,” they are fast, strong, hefty (usually, 25-50 lbs., but they can reach up to 100 lbs. and 5-feet long), and brilliantly shiny – a perfect blend of hard-won catch and photogenic photo op. In other words, a perfectly tall tale-worthy story and remembrance of your Tamarindo sport fishing experience.

Season: Year-round, with a peak December-April

All snapper species are prevalent in Costa Rican waters, but the two most often sought are pargo (red snapper) and cubera (Pacific dog snapper), the largest and meatiest of the family. In fact, cubera snapper can grow to a massive 5 feet long and 125 lbs. – an important fact, as these are another species you can keep and eat! Who’s hungry?

Season: Year-round, with a slight uptick from January-July

Mahi-mahi, aka dorado and/or dolphinfish – note: not dolphin the mammal, but rather dolphinfish, a true fish – are known for their small dorsal sales, brilliant coloring and, in males (= “bulls”), a prominently flat forehead. When sportfishing Tamarindo, you’ll hook specimens up to about 85 lbs. and, almost no matter the size, you’ll be in for a treat (and a tough fight): dolphinfish are fleet of fin, showy and, quite literally, named for their strength! (“Mahi-mahi” means “very strong” in Hawai’ian.)

Season: Year-round, with a peak October-April

We can help you arrange a variety boat options, including Half-Day, 3/4-Day and Full-Day fishing trips:

If you’d like help arranging your sportfishing Tamarindo adventure, please get in touch with our concierge, Cris! Her services are free and we promise, she’ll hook you up with the best option to match your Palo Verde adventure style.