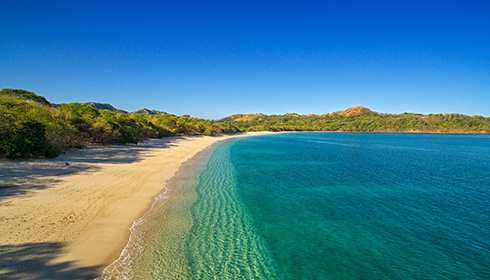 Weather in Costa Rica hack: If you’re traveling during the rainy season, choose the Tamarindo area, one of the sunniest spots in the country

The country may be smaller than the state of West Virginia, but the weather in Costa Rica goes big. Sure, we’re a tropical nation. Of course, we don’t have snow. And yes, our seasons are often simplified down to “dry season” and “rainy season,” but Costa Rican weather is a lot more interesting than that.

We’re close to the equator, which means we get 12+ hours of sunshine all year long: the sun rises and sets at the same time every day (around 5:45 a.m. and 5:45-6:30 p.m., year-round). We’re in the northern hemisphere but there’s no winter here; in fact, Costa Ricans typically refer to northern winter (December-March) as “summer” since this is the sunniest time of year, not to mention local schools’ “summer” break.

There’s plenty of diversity to the weather in Costa Rica, too. For most of the country, December-April marks the “dry” season; but in the Caribbean and Arenal, the seasons are flipped. Sticking to generalities, Guanacaste province (home to Tamarindo) is the driest in the country; this means we have drier rainy seasons, making Tamarindo a great choice for the best weather during May-November travel.

Here’s a breakdown of what to expect from the weather in Costa Rica, month by month:

The second official month of the dry season, January is as close as Mother Nature comes to a guarantee of all-sun, no-rain. The weather is basically perfect throughout most of the country, including the Tamarindo area: sun all day, every day and not a cloud in the sky. Temperatures vary depending on your exact location, but typically fall into the 75ºF to 90ºF range.

Exceptions to the rule: Arenal and the Caribbean coast, where January is rainy season.

February continues the dry season trend of all-day sun and cloudless skies, with temperatures from 75ºF to 90ºF. Note that, with Costa Rica well into its third month of no rain, the landscapes begin to dry out and vibrant colors fade.

Exceptions to the rule: Arenal, where February is rainy season.

While April is still considered the dry season, March marks the tail-end of the all-sun, all-the-time season. The sun is bright, the skies blue, and the land parched.

Exceptions to the rule: Arenal, where March is still rainy season.

Remember the rhyme, April showers bring May flowers? That’s only a little bit true in Costa Rica, where April is still mostly sunny. You may catch an occasional shower or even an unseasonal (but spectacular) thunderstorm, especially in La Niña years, when Costa Rica experiences more rains than in alternate El Niño years. However, consecutive daily rains would be uncommon (but not impossible) in April.

Exceptions to the rule: April is the last month of Arenal’s rainy season; it also marks the beginning of the second Caribbean rainy season.

May is a transitional month throughout much of Costa Rica, ushering in the rainy season with occasional thunderstorms and rain showers. So, how does Costa Rica define “occasional”? Depending on your location and luck, you could see anything from no rain during a weeklong stay (more likely in drier Guanacaste and Tamarindo), to everyday rains. Thunderstorms, when they occur, are impressive.

Exceptions to the rule: Arenal welcomes its dry season in May. Monteverde usually wrings an extra month out of its dry season, so you may get lucky there, as well.

By June, Costa Rica is well into the rainy season: daily rain is common, if not guaranteed, though showers often last just an hour or two.

Exceptions to the rule: Arenal is now in high dry season, although as one of the rainier areas of Costa Rica, you may still get caught in the occasional shower.

Rainy season continues with daily showers, usually in the afternoon. Thunderstorms are still common but are not as vehement as in May and June.

Exceptions to the rule: Arenal is still in high dry season, although as one of the rainier areas of Costa Rica, you may still get caught in the occasional shower.

Rainy season continues with daily showers, usually in the afternoon. Thunderstorms are still common but are not as intense as in May and June.

Exceptions to the rule: Arenal is still in high dry season, although as one of the rainier areas of Costa Rica, you may still get caught in the occasional shower.

September is the second-rainiest month of the year in most of Costa Rica, especially during La Niña years. All-day rains are not common but not unheard of, either; typically, you’ll have sunny mornings and all-afternoon rains. Guanacaste and Tamarindo have slightly better (= drier) weather.

Exceptions to the rule: The Caribbean coast hits its driest season in September, and Arenal continues to bask in the sun.

Hands down, October is the rainiest month of the year. All-day rains are possible but typically, you’ll have sunny mornings and all-afternoon rains. Guanacaste and Tamarindo have slightly better (= drier) weather, but don’t bank on full days of sun.

Exceptions to the rule: The Caribbean coast and Arenal both enjoy a continued run of dry and sunny weather.

November is a transitional month for all weather in Costa Rica: most of the country witnesses a transition away from everyday rain showers, while the Caribbean and Arenal begin seeing more rain and less sun.

Exceptions to the rule: None. It’s pretty windy, however, in Monteverde!

For most of Costa Rica, including Tamarindo, December marks the official beginning of the “dry season,” also known as the “high season” (for tourism) or “summer” (verano) to Costa Ricans. In Tamarindo, December is a time of bright sun, few clouds, and fewer and fewer afternoon rain showers. By mid-month, the rains have all but disappeared, while the landscapes are a blaze of green and colorful blooms, making December arguably the most beautiful month of the year.

Exceptions to the rule: Arenal and the Caribbean coast, where December is rainy season. In Monteverde, this is one of the windiest (and also chilliest) months of the year.