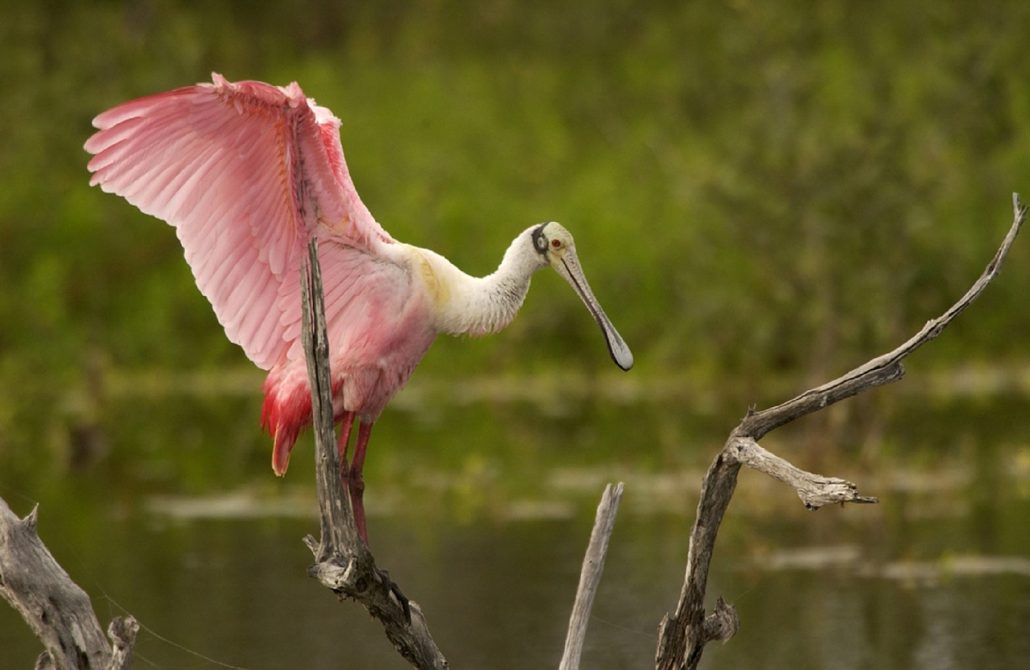 Palo Verde National Park is famous for its birdwatching (pictured: a roseate spoonbill)

One of Costa Rica’s seemingly greatest contrasts, spectacular Palo Verde National Park is home to a resounding dichotomy: rich and vibrant wetlands that simultaneously house one of the world’s foremost examples of tropical dry forest.

A contradiction, indeed, and one that works beautifully.

Palo Verde’s unique setting is owed to the Río Tempisque, which ebbs and flows over this otherwise arid region. The result is somewhat other-worldly, with sun-drenched dry forest unfolding over parched limestone, which then cozies up to rushing river and muddy habitats.

It’s a major watershed, a protected wildlife sanctuary, and an important dry forest, all rolled into one. And it’s absolutely fascinating. 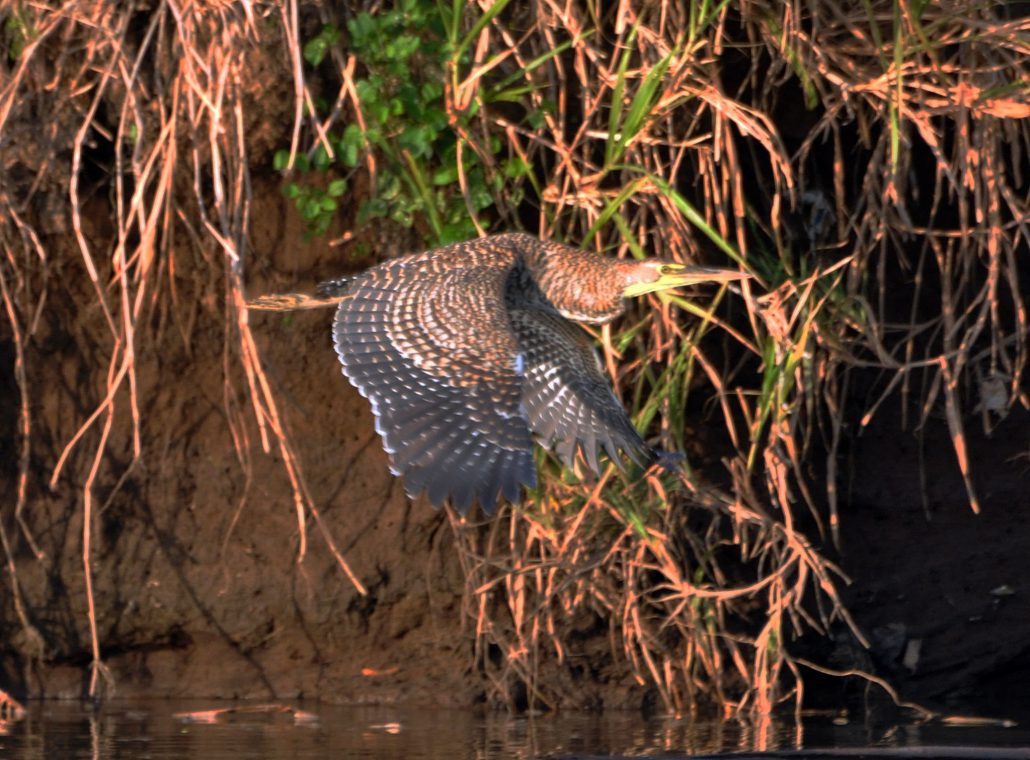 Bare-throated tiger herons are just one of 300+ bird species you can spot in Palo Verde | By Don Faulkner (Bare-throated Tiger-Heron) [CC BY-SA 2.0], via Wikimedia Commons

Named for a species of green stick, or palo verde, that is so often present in Costa Rican marshes and wetland habitats, Palo Verde is one of Costa Rica’s most biodiverse destinations. And that’s saying something, considering that Costa Rica boasts some of the most concentrated biodiversity on the entire planet.

And with that, we’ll jump straight in to the accolades: Palo Verde has been declared a “Wetland of International Importance,” by the Ramsar Convention on Wetlands. In other words, this is one of the most ecologically diverse places in Costa Rica and one of the world’s most significant wetlands. You know it’s going to be good.

Housed within just over 45,000 acres, Palo Verde National Park is home to 15 distinct habitats – a result of varied land, chemical compositions, and geological conditions. The result is a park of spectacular natural beauty and diversity, including lagoons and marshes, deciduous forests and plains, limestone hills and riverside forests, wooded savannahs and saltwater mangroves, among many others.

And that brings us to Palo Verde’s main attraction: wildlife! This incredible – and incredibly dense – biodiversity means that Palo Verde National Park is also a haven for thirsty wildlife, especially during the long dry season (November through March), when every last drop of water is sucked from the soil. In contrast to this parched and cracked land, marshy riverbanks stand as life-giving oasis.

And oh, what an oasis it is! Palo Verde plays annual host to more than 300 bird species, including the greatest concentration of shorebirds and waterfowl in Central America. In fact – and just imagine it! – up to 250,000 birds can be found here. That’s a quarter-million birds, all living in one national park.

And, indeed, birdwatching is Palo Verde’s biggest and most important attraction. During the dry season, thirsty fowl concentrate around the river, while during the wet season, floodwaters rise to form welcoming marshes that attract migrating birds, flying south to escape the winter.

Note that Palo Verde’s trails play a very, very distant second fiddle to boat tours. Please consult a park ranger before setting out on any trail, as current conditions depend heavily on weather conditions. 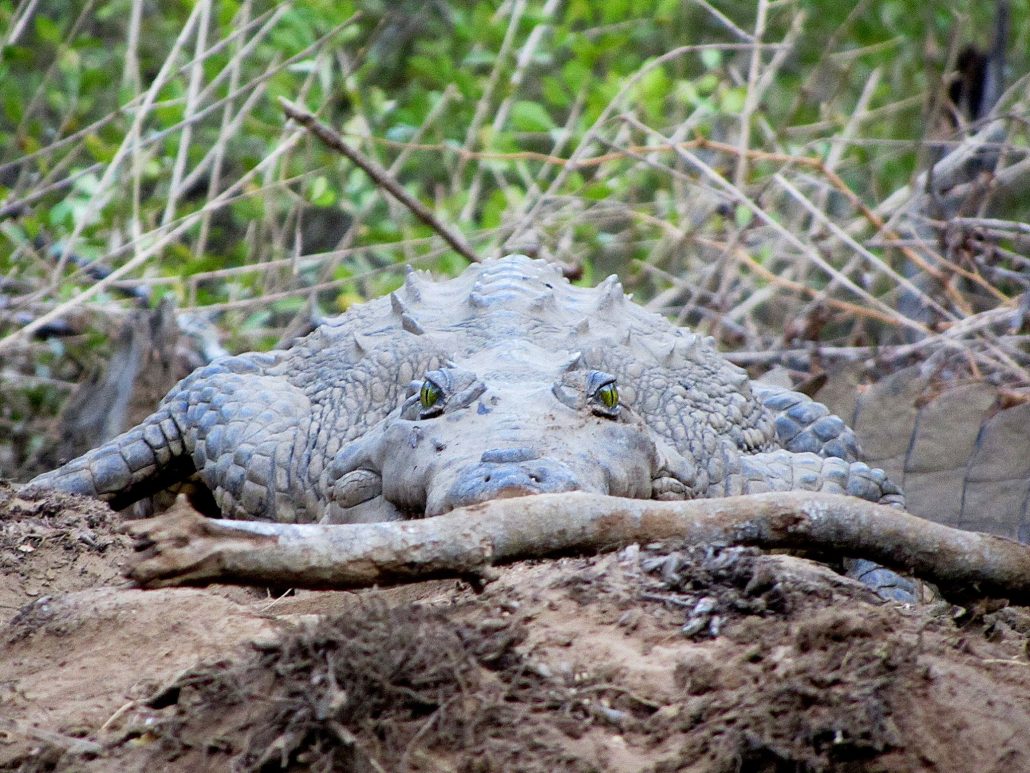 I spy with my little eye…

Again, remember, up to 250,000 birds live here, all at one time. With such a high concentration of migratory birds and resident waterfowl, you’re likely to spot many species – herons, egrets, storks, ibis, spoonbills, grebes and ducks, among them. Additionally, if you look into the tropical forest that surrounds, you’ll also spot toucans, parrots, and the only native colony of scarlet macaws in the dry Pacific.

Yes, Palo Verde is a special place. And, while we don’t want to hit you with a laundry list of the 300 bird species you could spot here, we do want to impress you a little. So, we’ll just give you a taste of what you could spot, specifically: great egrets and anhingas, pink heron and snowy egrets, green-backed herons and roseate spoonbills, snail kites and blue-winged teals, northern shovelers and black-necked stilts, black-crowned night herons and cattle egrets, great currasows and American widgeons, among many (many!) others.

And, while they’re easy to overlook in the bird-watching scramble, many bucket-list mammals and reptiles also make their home in Palo Verde. Keep your eyes and ears peeled for white-faced monkeys, white-nosed coatis, collared peccaries, American crocodiles, howler monkeys, armadillos, jaguarondi, and even white-tailed deer, Costa Rica’s national symbol. (We know – not what you expected, right?!)

Flora fanatics, we haven’t forgotten you, either! In addition to a full menu of aquatic plant species – gamalote, trista, and tifa grass, among them – Palo Verde is home to stunning trees, including the majestic ceiba and potbellied ceibo, as well as pochote, glassywood, medlar, javillo, rosewood, and guayabón.

The Tempisque River is a sight in and of itself, but it’s also a given: If you visit Palo Verde National Park, you’ll also visit the river. That’s just how it’s done.

So, what should you look out for while you’re on the river? Where should you go? Begin by requesting your guide take you by Isla Pajaros, or Bird Island. This small, 5.6-acre island is located toward the front of the park and holds the extraordinarily important accolade of housing the largest population of black-crowned night herons in the country, as well as important nesting sites for pink herons, glossy ibis, needle ducks, gray herons, and cattle egrets.

Look into the dry forest that surrounds the river, and you’ll catch a glimpse of a tropical forest that once swathed Central America’s Pacific coastline, but that has slowly dwindled to just a few sparse patches. Indeed, tropical dry forest is in danger of extinction– an entire habitat, whittled down to just a few areas. And right here, right now, you’re in the heart of one.

If you’re visiting during the dry season, when every last drop of water has evaporated from the surrounding scenery, then your best chance of spotting wildlife is at river mouths and other wet areas: birds, mammals, and reptiles often gather here, drunk on the plentiful waters of this lush oasis.

While you can visit Palo Verde any time of year, for best bird-watching, aim for the dry season (December through April). Otherwise known as North America’s winter, this is the season for both resident birds and migratory species alike.

Additionally, in wet season, parts of Palo Verde are subject to flooding and, therefore, closure. That said, if you’re visiting during the rainy season (May through November), take heart! Boat tours still operate and many resident birds will still be happy to pose for your camera.

As Costa Rican national parks go, Palo Verde’s facilities are rather sparse. In addition to the official ranger station and a handful of trails, amenities are seriously limited. For this reason, among others, we recommend taking a boat tour to and through the park.

How to Get to Palo Verde National Park:

We may sound like a broken record, but the best route to Palo Verde is via a boat tour – no fuss, no headache, no worries about the road, the facilities, or any other issues related to the park’s remote location.

Boat Tour: So, quick intro: Palo Verde safari boat tours begin with pick-up up at your Tamarindo vacation rental. You’ll take the 80-minute drive to the dock, where you’ll hop in a covered boat for a tranquil cruise down the Tempisque River. The best tours also include a typical Costa Rican lunch, as well as a once-in-a-lifetime experience at Guaitil, an indigenous village famed for its traditional pottery.

But, let’s say you want to drive. Well, then you’ll be happy to know that the road to Palo Verde is drivable year-round, provided you rent a 4×4 with decent road clearance. Here’s how to get there:

If you plan to hike the park, then you’ll need to head north of Filadelfia, following signs to Liberia. In Liberia, take Route 1 (the Inter-Amerian Highway) east to Bagaces. In Bagaces, follow signs pointing to Palo Verde National Park. Again, a 4WD vehicle is required for this trip, especially in the rainy season.

Private Transportation/Tours: If you’re not quite up for the adventure of tackling Costa Rica’s backroads on your own, but you still want to hike, then your best option is to hire a driver or book a guide to Palo Verde. With either option, a guide will pick you up in Tamarindo and ferry you to the park in an air-conditioned van and/or 4×4. Easy peasy, lemon squeezy.

If you’d like help arranging a Palo Verde boat tour, rental 4×4, private transport, or Palo Verde day trip, please get in touch with our concierge, Cris! Her services are free and we promise, she’ll hook you up with the best option to match your Palo Verde adventure style.